Close to 1 in the morning Harry heard some noise outside in the backyard. He probably has a heightened sense of hearing, just another of his super abilities he claims. He looked outside the window and saw five racoons stealing food from the bird feed. Racoons are nocturnal mammals, like Harry, and often hunt at night, like Harry.

I decided to act and told Harry to follow me. We went downstairs into the sunroom. Everyone else was asleep. I armed myself with a broom, opened the door to the patio, and stepped outside into the dark and stormy night. Harry decided to stay back, take pictures, and guard the door so that he can slam it shut in case the racoons become a threat.

I inched forward quietly. The racoons were busy eating the birdfeed and bread that my mom leaves outside daily. I lifed the broom and brought it down on the fence inches away from the closest racoon.

The broom hit the fence and made a defeaning noise that must’ve woken up, or at least disturbed the sexual congress, of half the neighbourhood.

I had expected the racoons to jump up in the air. I had expected them to consider me a mortal threat and scuttle away in the darkness as fast as possible. Instead, the racoon paused eating, looked up and focused it’s ghostly yellow eyes straight into my eyes while the others continued eating as if nothing had happened.

The adrenaline that had been coursing through my veins vanished as if it had never existed. The flight routines activated and took over instantaneously. “RUN!”, commanded my brain.

I turned and ran towards the door… only to find it locked already with Harry retreating backwards into the house with a fearful look on his face.

He shook his head and pointed at the racoons.

He laughed his evil maniacal laugh and finally moved forward to unlock the door. Fortunately the racoons were more interested in the food they had in their paws than in attacking me.

We spent the next 5 minutes looking at the racoons as they ravaged the birdfeed and ate everthing they could get their dirty, filthy paws on. Finally they climbed down the patio fence, onto the ground, and moved north into the neighbour’s backyard to devour his crops.

“The Ontario Tourism Marketing Partnership is a government agency created in 1999 to partner with Ontario tourism operators to showcase Ontario as a four-season must-see travel destination at home and internationally.”

The OTMPC Summer 2007 Brand Campaign had a 90 second “There’s No Place Like This” ad that was shown on TV regularly during March and April. About 40 seconds into the commercial (watch here) you will see a ridiculously long suspension bridge. The first time lunato and I saw the ad on TV, we said “wow!” simultaneously and decided we must where that bridge is. It had to be in Ontario, but where ?!

Lunato and I continued our search on the internet and our research seemed to indicate the bridge might be in the gigantic Algonquin Provincial Park. Now, months later, with more information online about the ad campaign, we know that the bridge is Canada’s longest foot suspension bridge, 600 feet across the Eagle Canyon. Insane. We’re planning on visiting it during the Fall.

During the Hunt For The Bridge, lunato stumbled upon the Whirlpool Jet Boat website. Before I go any further, click here to watch a video of the Jet Boat ride.

The Jet Boat ride starts from Niagara-On-The-Lake and travels along the Niagara River towards the Niagara Whirlpool, which is a natural whirlpool with a depth of about 38m. The water flowing from the Niagara Falls flows into the Niagara River and then takes a 90 degree turn thus forming the whirlpool. The water around this area is extremely turbulent with rapids all over the place.

Once boat engines became powerful enough to brave these rapids, it probably did not take too long for someone to realize that people would pay money to get soaked with water.

Since Harry was going to visit Canada soon, lunato and I decided that we will wait until he arrives and then go together. $56 CDN per person is a bit pricey but it was sure worth it.

We had reservations for 5 PM. Lunato was working until 2 and I had taken the day off so we were in front of her workplace at exactly 2 PM. Yonge and Bloor in Toronto to 61 Melville Street in Niagara-On-The-Lake is about 138 km and we had 3 hours until the jet boat left the docks. However, visitors are expected to arrive at least 15 minutes before departure for an info session. With the horrible Toronto Friday Traffic to contend with, I had to drive very creatively to reach our destination on time. Dooh and Harry fell asleep while I was driving.. what ungrateful punks. At least we got a funny picture of them.

The Jet Boat ride was amazing. We were lucky enough to be in the front row. Dooh kept saying “I hate you, I hate you” when I insisted we sit at the front.. but once the ride was over he was grateful that I had insisted to be at the front. The “Ten Thousand Gallon Nasal Flush” really felt like the 10k Nasal Flush. We were soaked to our bones from head to toe. Numerous times the water inside the boat was up to our chest. It’s an amazing ride and well worth the admission price. Just make sure you take an extra set of clothes with you; shirt, pants, underwear, socks, and a towel too!

After the Jet Boat ride we drove along the Niagara Parkway to Niagara Falls, stopping occasionally along the way for pictures.

Lunato and I recently got in touch with Margarita through Lisa, our 2002-2004 roommates from Ottawa, and while browsing through her wedding pictures on facebook, one picture stood out in particular. It was so unique and nice that lunato insisted that we create our own version of it. After multiple tries, we succeeded. So here they are:

Niagara Falls is always fun. Lunato had been putting off going to Screamers until Harry was here so we went there right after parking and having a bite to eat. It was just as much fun as I imagined it would be. I led the way followed by Lunato, Dooh, and Harry. Harry opted to stay at the back behind Dooh, his favourite position. We yelled and screamed in absolute darkness but kept inching forward. At one point someone breathed down my neck and whisphered ominously “Leave the girl behind.” Hehe.

We took a few more pictures here and there and then it was time to head back. We were sleeping at my mother’s house in Mississauga tonight. She had insisted that Harry and his mother should visit her while they were here in Toronto. They’ve known each other almost as long as Harry and I. Unfortunately she had already left for Ottawa by the time we reached Mississauga. Oh well, maybe next time.

My first visit to Wonderland was during highschool with Shekhar and Harry. Our highschool, Merivale Highschool, was taking students on its annual Wonderland trip for, as far as I remember, $40 per person. Shekhar and I bought tickets in advance and were roaming around the school waiting to board the chartered bus when we saw Harry walking in the hallways all by himself. Somehow he had managed to shake off the numerous highschool girls that were stalking him. School ended at 2:15 PM back in 1999 and it was close to 4 PM so Harry had probably been engaged in some unmentionable activities with some of the females that he deemed worthy of talking to.

And so all three of us boarded the bus and went to Wonderland, 453km away.

It was grad night at Wonderland and students from all over the province, some even from Montreal, were at the park. We reached the park around 8 PM and stayed there until 5 in the morning before heading back to Ottawa. It was a fun and memorable night.

The 2nd time I went to wonderland was with Alidhooh, Ed, and Harry in 2002 and the 3rd time was with Lunato, Alidhooh, and Harry in 2003. Today we had a re-union with Harry in Wonderland.. after 4 years. As mentioned before, Alidhooh hadn’t met Harry ever since he left Canada in 2003 and Lunato and I last met him in Indonesia in 2004.

I guess it was an appropriate place to meet after all these years. The cool nonchalant casualness of the reunion sure matches Harry’s demeanour. Nothing fazes him. Nothing surprises him. Nothing brings joy to his life.. he has transcended the mortal plane and sees things as others do not. He sees the past, present, and future all at once so he knows laughter and enjoyment today doesn’t necessarily mean anything in the long run. Eons from now when all has turned to dust and the Big Crunch is imminent he will reflect at the sum experience of his existence and he will surely not remember that he met friends that love and care about him in Paramount Canada’s Wonderland on a sunny summer day on June 14th 2007. 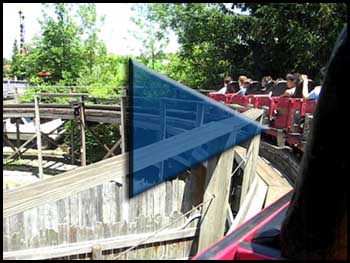 Ocean’s Thirteen is an enjoyable movie but it didn’t need to be made at all. Pacino’s talent is wasted in this movie.