as decided, we woke up at 7:00. we were still in our ihrams. the loading of all the necessities in the car took about two and a half hours. naseem uncle was in charge. all 16 of us, 8 men and 8 women, were to board a single Dodge Van with a huge load of various things. however, we managed it and left at 10:00. the fat driver, saeed, took a wrong turn when we were in mina. well, it wasn’t his fault, he did it on purpose. shahana aani was screaming, “turn right, turn right” but the driver turned a deaf ear to us. 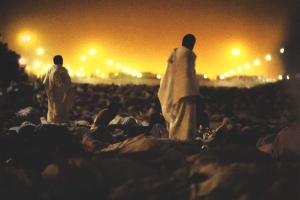 we went to muzdalifah and then back to mina. at 11:00, we were still trying desperately to reach the mosque were we were to spend the day. me, skid, aarshi uncle, and naseem uncle got off the van and started on foot. it was such a relief. however, we lost the van and then had to start searching for it. when we did find it, maa and shahana aani were not inside. they were gone in the mosque. then shahana aani came and told everyone to unboard and go with her. only the ladies with thrawn and the two little boys. me, skid, naseem uncle, aarshi uncle, and the driver were left in the van. we were given the objective of finding a parking place and come back with food to the maingate of the mosque where thrawn would be waiting.

we couldn’t find any parking spot though. so skid and aarshi uncle were told to go to thrawn and then come back. we found many places and parked there but the driver had a police phobia and everytime he saw one, he ran away. we gave a lecture to him and parked at a place finally. we offered duhur prayers and then left saeed, took the keys, and went to the place were we had left skid and aarshi uncle.

unfortunately they were not there. we waited half an hour and then naseem uncle left me at 1:00 ordering me to stay put. i did. 55 minutes passed. i can never describe to anyone how i passed those boring minutes. i thank God that i had an umbrella. suddenly, i spotted thrawn and skid coming towards me. i ran to them and we went to the car, ate, and then headed for our fort in the mosque. we found it eventually. it was polluted with people. everywhere you look there are people.

me and thrawn went to the bathrooms at 3:05. when we came back it was 4:10. there were 10 bathrooms but each door had a queue of atleast 11 people. they were stinking ugh. we came back and i started writing. now it is 4:45 and skid and aarshi uncle are going to go get some tea.

i slept afterwards till 6:00. skid and thrawn were playing. then aarshi uncle and thrawn went to find a bathroom outside the mosque which might be clrea. i can’t comb my hair because it is prohibited for a pilgrim and i am a pilgrim. it is only 6:05 right now. we have to stay here till fajr which will be at approximately 4:05 am. 10 hours left.. what will i do ? nothing.. just lie here and think. it is probably the slowest day of my life.

we had to eat food, i.e. dinner, so we left after isha to get some from the van. it takes a fair 15 minutes to get from the car to the mosque and vice versa. we went there but there was nothing to eat, so we came back and told the ladies that we were going back to the house to eat and drink and relax and that we will come back at 2:00 or 3:00. maa and aarshi aunti (i think her name is nasreen) volunteered to come with us. we took our belongings and left the spacious place and reached the car through the shortcut. there we learned that we can get out of Mina but we can’t get back in. so instead, we bought food and came back to the mosque.

half of our space had been captured by the other pilgrims. we sat there, somehow, and ate. then me and skid decided to go back to the car and sleep there. we left but when we got there, they were leaving. so with no choice left, we again headed back to the mosque. there we slept somehow

i suddenly woke up at 1:30. sheesh, only two hours of sleep. just think, imran, hassan azmat, durrani, and hammad must be in this heap of 2.3 million pilgrims. somewhere here but i do not know where.

it took about an hour to go back to sleep again. then i woke up at 3 and didn’t sleep till 3:30. went to the bathrooms and made ablution. and now at 4:05 am, we are waiting for the fajr prayer. naseem uncle told us to wait for him where the car was at 7:00. wonder what will happen tomorrow. 4:25. still no sign of the moazzin. however, we got most of our place back.