so at 4:30 we heard the moazzin narate the call to prayer. thus, we experienced the dawning of a new day. we prayed and as all the other people started to leave, we captured their positions. then we slept. i woke up at 6:30. then i went and washed my face and thus completely woke up. we had been given the time of 7:00 by Naseem uncle. so we took all our belongings and left the beautiful mosque. we took the shortcut and reached the place where the car was parked. then, would you believe, we waited for 2 hours and 17 minutes. that interval almost killed me. i was sure i would go mad if another 30 minutes passed. bhaijan was sleeping, unaware of the upsetting situation we were in. all the ladies had also gone to sleep. I was also dead tired and was lying. sunny and aarshi uncle were still wandering around when sunny cried, “There they are!.” all of us, except bhaijan woke up. then we came to know that they had reached Mina since 3:30 but were caught in a traffic jam.

we boarded the van and luckily me, bhaijan, and naseem uncle sat on the roof of the van. it self so good there. we took three umbrellas and then sat there with them over our heards protecting us from the heat of the sun. the sun was shinning down on me (Jackyl). we headed for Arafat and after a lot of wandering due to our ingenious driver, we reached Arafat. there, shana aunti had a war of words with the policeman and he granted us permission to park the car. we then unloaded the car and then after crossing a downward slope of 28 or 30 degree, we reached a perfect position to set up the tent.

we did set it up but it was so stuffy in there that we decided to unset it or in other words, to open the tent. i helped faiza aunti with the help of the big pole to climb up the slope. she took one end and i climbed the hill with the other end in my hand. we then had to set up the roof of the tent near the van. it helped us to lie down and sleep in the shade. i laid my body down and slept for an hour. we then arranged for duhur prayer. also prayed asr prayer.

in Arafat, many people are constantly seen distributing different things (labans, apples, bananas, pepsi, water, etc) for free. met faheem in Arafat. he’s travelling with Hamla Yasmeen. well, we prayed asr and asked for many things from our mighty Allah. then we left Arafat at 7:30.

all the buses, vans, trucks, and motorcycles were having a content of “who can drive more recklessly and avoid hitting each other.” again me and bhaijan were on the roofwith naseem uncle. the little kids also wanted to sit on the top but the driver refused to drive if they sat on the roof. he showed good thinking there. it felt so good up there. the cold breeze. the mosque lighted with electrical light. the cars passing by. the particles of dust. our top of the ihram fluttering due the air.

we reached Muzadalafah but kept going on till we reached Mina then headed back. the reason was that we were on a bridge and there was no way down. if there was any road leading us down, policemen were shouting “haiiya haaiya” meaning “get out of here” or “go away”. we then found a suitable place and unloaded there. i then went to the bathroom for ablution and then hurried back. we then held Maghreb and Isha prayers at about 9:30 or something. then we (me, bhaijan, and sunny) went to the bathroom. came back at 10:05. then ate dinner; rice and cooked sheep. speaking of sheep, we passed the huge slaughter house on the way here. inside were millions of sheep. thats right, millions.

mumma couldn’t keep her homeostatis (the process by which a living organism keeps its internal environment constant) and she was suffering from low blood pressure. well, after eating dinner she felt better. thank God. and now she’s fine. thank God again. now its 11:00 and we are all lying down and are about to sleep.

i kept awake till 12:00. shahana aani is a very generous person. she distributed many different kinds of eatables to different people. i moved the can of water and two cooler from outside to inside the van on her command. everybody was taking water without permission. well, bye for today. 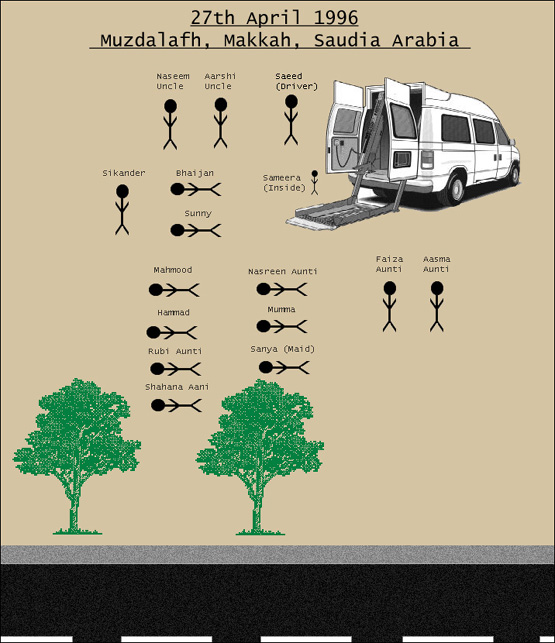