Dr. Robert Fisk, Middle East Correspondent for The Independent (London) Newspaper, will give a public lecture, “The Fantasy War: Weapons of Mass Destruction and ‘Democracy’,” at 7:30 p.m. in Room 360, Tory Building at Carleton University. All are welcome. Contact: Randal Marlin, 520-2600 ext. 3797.

i’m taking dooh’s MiniDisc recorder with me so if we’re allowed, i’ll record. i dont agree with everything he writes, some of it can be quite biased, but i like reading his articles and its always good to have both sides of the story instead of being constantly bombarded by the same crap. 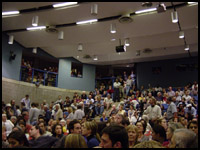 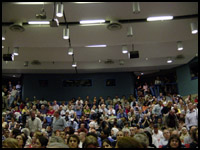 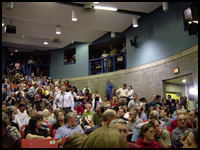 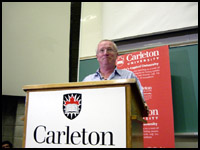 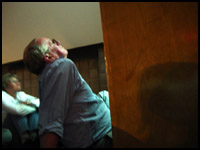 i had suspected that lots of people would show up and i hoped we would get there early and secure good seats. however, the event was moved from Tory Building to Bell Theater in Minto Center so by the time we reached there, it was too late and the theater was packed. there were people in seats, standing by the doors, standing in the hallways, sitting in the aisles, and sitting in front of the podium. considering how big the audience was, i think we got good seats.. an arm’s length from where fisk was standing and delivering his lecture.

as for the lecture, it was great. an eye opener in fact. he made numerous parallels between whats going on right now and what has happened in the past. we don’t learn anything from the past and keep repeating the same mistakes over and over.