my cellphone rang around 330 pm. i picked up and it was shekhar. i knew he was coming to toronto again since shweta was going to participate in the North American Talent Hunt finals. but shekhar & co. had had some trouble on the highway….. they ran out of gas!! lol.

i know shekhar has a habit of ignoring the gas meter when it gets close to empty. once we were driving from mississauga to north york and the meter was exactly at E but shekhar kept insisting that we have more than enough to make it.. and we did. E is not completely empty but more of a warning to get gas as soon as possible. surprisingly you can drive quite a lot of kms after hitting E.

but not today. they were stranded on the highway, in the left shoulder, somewhere close to Yorkdale mall. shekhar was wondering if i am free and if i can bring them some emergency gas right away. calling a tow truck would cost more than $100 – $150 just to reach the closest gas station.

since i wasn’t doing anything majorly important, i agreed and left right away with gas in a small red gas container. they were on 401 west bound while i was driving on 401 east. i passed them about 20 minutes after leaving my house and then made a U turn after yonge street to get back on the 401 express west bound. 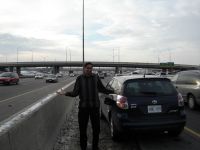 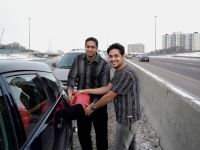 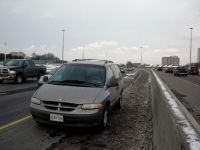 it was a bit scary driving at 110 km/h on the fastest lane and then slowing down to come to a halt on the left shoulder. since its winter and there were remnants of the last snow fall on the shoulder, i was worried about whether i would have enough space to come to a full stop without loosing control because of the highspeed and snow. thankfully everything went ok and i reached them safely.

later in the evening shweta sang in front of more than a hundred people… and she won!!!! now she’ll be going to India for the semi-finals.. airfare paid and provided by the organizers. so cool and awesome. congrats! lunato also called from korea to congratulate here. Rogers TV asked for a short interview and she will be on TV during one of the many multicultural news they have on the Rogers Local channel. 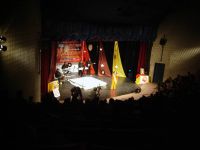 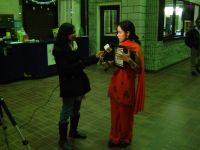 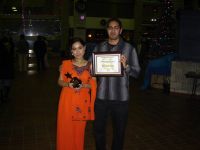 we had a late dinner at dennys and then went downtown toronto. eventually around 4 am shekhar dropped me home and they departed for their long journey back to ottawa. 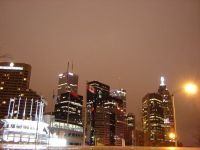