I used to say “We have to go there someday” whenever the Medieval Times commercial was be on TV. Lunato surprised me this year for my birthday with two tickets for the show. It was wonderful and we would highly recommend it to everyone.

Dooh, Lunato, and I started making plans as soon as Harry mentioned that he was going to visit Canada during June of 2007. We discussed back and forth about what we should do, where we should visit, and most importantly when Dooh and Harry should visit Toronto from Ottawa.

After much deliberation it was decided that they will depart from Ottawa on 13th, Wednesday, around noon and spend 14th, 15th, and then the weekend of 16th and 17th in Toronto. Lunato, excellent at planning vacations, made detailed plans for how to best utilize each day.

Dooh and I applied for 2 days-off from work. Lunato is free from 2PM on weekdays so she decided not to take time off for Thursday or Friday. Shekhar was supposed to join us as well but unfortunately he had a previous engagement for the weekend that he just could not back out of.

On the morning of the 13th, mere hours before the Greyhound bus was scheduled to depart from Ottawa, Harry called me and informed me that he is not coming because something came up.

Dooh was furious but being the patient man that he is he held his tongue and quietly made his way to the Bus Terminal.

I used profanity, told Harry to do as he pleased, hung up, and went back to work.

Lunato was shocked as well but she gave him the benefit of the doubt and tried to convince me that some emergency situation must’ve occured and that is why he can’t adhere to the orignal plan. Tsk tsk, she simply hasn’t known Harry as long as Dooh and I have.

Dooh rode the bus alone from Ottawa to Toronto. We met him at the Bus Terminal near Bay and Dundas, argued and whined about Harry’s yet-again-but-to-be-expected casual disregard of pre-made, pre-approved, pre-confirmed, pre-reconfirmed and pre-re-reconfirmed plans. Arrrgh!!

But that’s typical Harry and we love him for what, and who, he is. Besides, as he commented later, “It would be a boring story to tell if everything went smoothly”

Dooh’s birthday was on the 11th of June and Lunato and I had deliberately ignored it and hadn’t called him or wished him a happy birthday. We were going to take him to Demetre and celebrate together with Harry. Demetre’s strawberry-belgian-waffle-ice-cream is delicious and the Demetre staff played the birthday song for Dooh when they brought him his food. I think it was a nice surprise.. he wasn’t expecting it at all.

After Demtre we just went home instead of wandering around downtown Toronto until the wee hours of the morning. While complaining about Harry and narrating past episodes of Harry’s chicanery, infidelity, treachery, betrayal, duplicity, perfidy, and knavery to Lunato (one of my favourite pastime) the lights went out in the whole neighbourhood. After fighting-off the invading mutant zombie horde we finally went to sleep fully expecting Harry to not show up the next day.

In korea, birthdays, especially kids’ birthday, don’t matter so much. Nowadays it’s really different though, but as far as until my generation, it didn’t matter.. ahem ahem, sounds like I am pretty old, doesn’t it? lies! But here in Canada, birthdays are really a big deal and I am so used to it by now :D

So my twenty first birthday again!.. thank you, thank you!

A day before, friday, sikander came to downtown to pick me up. He dragged me to the corner of the street and opened a car door in front of me just like 3 years ago.. hahaha very surprised and at the same time funny that it was same surprise and I still didn’t have any idea until he opened the rental car door. (yeah yeah we are still a subway couple).

We went to Bestbuy in downtown to get our new digital camera and we found the one we wanted to get. While we were hesitating because there weren’t any new unopened box ones and only opened-and-returned ones were available, a black-and-white couple walked over to us and told us that Futureshop is way cheaper than here for the same camera. See, multi-colour couples are smart and kind :D

So we got a brand new digital camera from Futureshop instead of Bestbuy. By the way, I wonder what others’ opinions are about warranties. For me, I really feel I am being ripped off when I pay for extended warranty. So I kept sending sikander the signal not to buy the warranty but he paid more than $100 for warranty saying “what if”. “but again, what if it goes to total waste?.” “then that’s even better.. nothing wrong with the camera” well.. warranty mystery will be solved in 3 years time.

My birthday was on Saturday and usually I sleep until I can’t sleep on Saturdays. I had hardly opened my eyes when sikander woke me up for breakfast. Gotta wake up to have breakfast with you? Oh well.. compromise.. marriage is all about compromising, isn’t it? 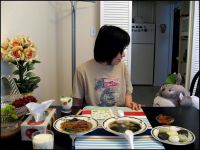 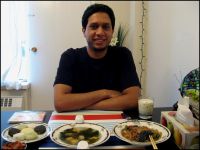 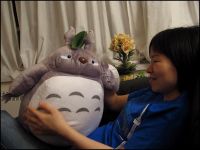 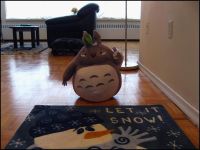 We went to downtown Toronto, driving along Yonge street instead of taking the subway. Yonge street is the longest street in Toronto? Ontario? Canada? In the world? Anyhow, whenever the subway went above ground along Yonge street, I wanted to walk or drive on that part of Yonge street and finally today I did. It was pretty nice with many small, unique shops, restaurant, and cafes, and the atmosphere was pretty active and energetic. Instead of highway all the time, it’s pretty enjoyable.

We were on our way to the CN tower (currently the tallest free-standing structure in the world). Hurry hurry!! The sun was setting and we wanted to see morning Toronto. There was a long line and it took so long time to get to the ticket booth. But still outside was bright enough. We got to the observatory room and could see the whole city of Toronto. Beautiful.

From our apartment we can see CN tower but from CN tower we couldn’t recognize which building was our apartment building. Somewhere over there I guess.

Soon the sun set and I could see night sight as well. Definitely, I love night sight more than the morning. At night everything is enchanted and looks fascinating. Hehe, I am night person without doubt. Maybe it’s because I came to this world late at night. Oh, here is a video of the view you see when taking the elevator back to the ground. Nice, isn’t it ?

Phewh, pretty busy day. Thank you so much sikander, for making my birthday something memorable always and waking up so early to prepare all the food. Thank you to all my friends and family… and I appreciate my mom who gave me birth and raised me with love and sacrifices.