@cyalm retweeted the following into my timeline:

Happy birthday Ami, Pak & the world is poorer without you. Wherever I go people miss her, yearn for a voice like hers. Her legacy lives on through organizations she founded like SAHR,HRCP & AGHS. She continues to inspire the young with her struggle against dictatorship & misogyny. RIP pic.twitter.com/S0eoApaDU9

The tweet is from a Pakistani journalist, Munizae Jahangir and she is wishing Happy Birthday to her mother, Asma Jahangir, a human-rights lawyer and social activist who passed away in 2018. January 27th, 2020 would’ve been her 68th birthday.

I’ve been reading Cyril’s columns for Dawn and following him on Twitter for many years but did not know Munizae and would’ve scrolled past the retweet without any thought other than silently wishing that her mom is at peace. However, the image in the tweet seemed familiar.

The photograph was posted on Simon Frasier University’s Flickr account in 2017 when they awarded Asma Jahangir with an honorary degree. The photo was licensed under Creative Commons, which essentially means that the photo does not have copyright restriction on it and can be used by anyone for commercial or non-commercial purposes as long as the owner/creator of the photograph is given “appropriate credit.”

It had looked familiar because on April 23rd, 2019, I had found the image on SFU’s Flickr account, uploaded it to Commons, updated the image field on Wikidata, and added it to Wikipedia‘s article for Asma Jahangir.

Wikipedia is usually on the first page of results on Google and Google Image search shows this same photograph of Asma from Wikipedia as the first result, at least as of February 2020.

I’d like to think that Asma’s daughter Munizae went to Google to look for an image, found this photo as the first result, downloaded it, and then used it in the tweet honouring her mother; and I am glad that I played a tiny, minuscule part in that process.

Wikipedia is currently in the top ten most popular sites and is colloquially known as “the encyclopaedia anyone can edit”. The non-profit Wikimedia Foundation that hosts Wikipedia has numerous other projects that share the same goal: to increase access to free knowledge.

I like Commons because of my interest in casual photography. As of February 2020, the project has 47 million files and is the world’s largest free-to-use collection of photographs, illustrations, videos, music, and more.

Some of my photographs uploaded to Commons have been used on the web. My first upload was in September 2006: Vancouver International Airport. Licensing your uploads under CC BY-SA means that the person using your work is obligated to give “appropriate credit.” That usually means printing your name at the end of the article with a link to where the photo was sourced from.

For example, this article on NextShark about possible Listeria contamination at Trader Joe’s uses my photograph of Trader Joe’s in Amherst and states: “Sikander Iqbal (CC BY-SA 4.0)” at the end. Nice, and thank you, Bryan Ke!

So, go ahead, create an account on Wikimedia Commons and start uploading your original photographs and share them with the world, or find photographs with a free license and upload them to Commons (with proper attribution, of course) and you just might see the result of your volunteer effort while idly browsing Twitter.

The mission of the Wikimedia Foundation is to empower and engage people around the world to collect and develop educational content under a free license or in the public domain, and to disseminate it effectively and globally. 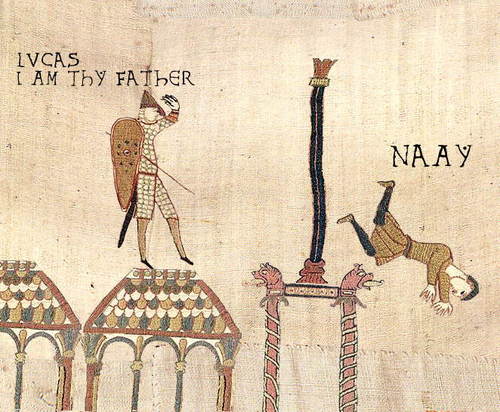 Google released an email uploader recently called Google Email Uploader that allows a user to transfer emails from Microsoft Outlook to Gmail. I’ve had a Gmail account for a few years now but I didn’t consider it my primary address. Fed up with the hundreds of spam emails that arrive at my sikander.org Catch-All address daily, I decided to shut it down and move operations to Gmail. 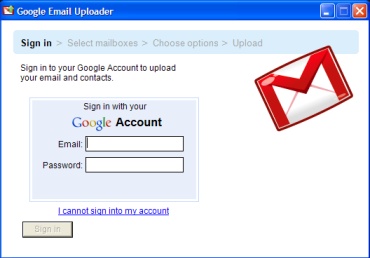 Unfortunately Google Email Uploader works with Google Apps hosted Gmail only. A normal user is not able to use it. However, there is an alternative.

IMAP stands for Internet Message Access Protocol and it allows a client to access email from a remote server. Google added support for IMAP access to gmail last year. 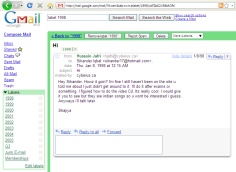 I’ve backed up most of my email archive to Gmail. Google will automatically label the emails that your import into it with the folder’s name. The contents of an Outlook folder called FoxTrot will be labeled as “[Gmail]/FoxTrot” which you can easily rename back to “FoxTrot”.

It’s a relief that I don’t have to worry about losing emails again. I can throw away the “Backup” cds and dvds. What a wonderful service.. and free too!

The oldest email I have is from January of 1998 from Shajiya Jafri. She showed me how to open an email account on hotmail.com when we were students at Merivale Highschool. I don’t remember what website I told her about.. maybe Shacknews ? Haha!