I miss being able to walk everywhere. Step out of the Dongpyeon apartment and there are 3 bakeries within a 5 minute walk. Pharmacies, doctors, libraries, convenience stores, pet stores, unmanned 24-hour ice cream store, Paris Baguette … it is astonishing how livable the cities in South Korea are. 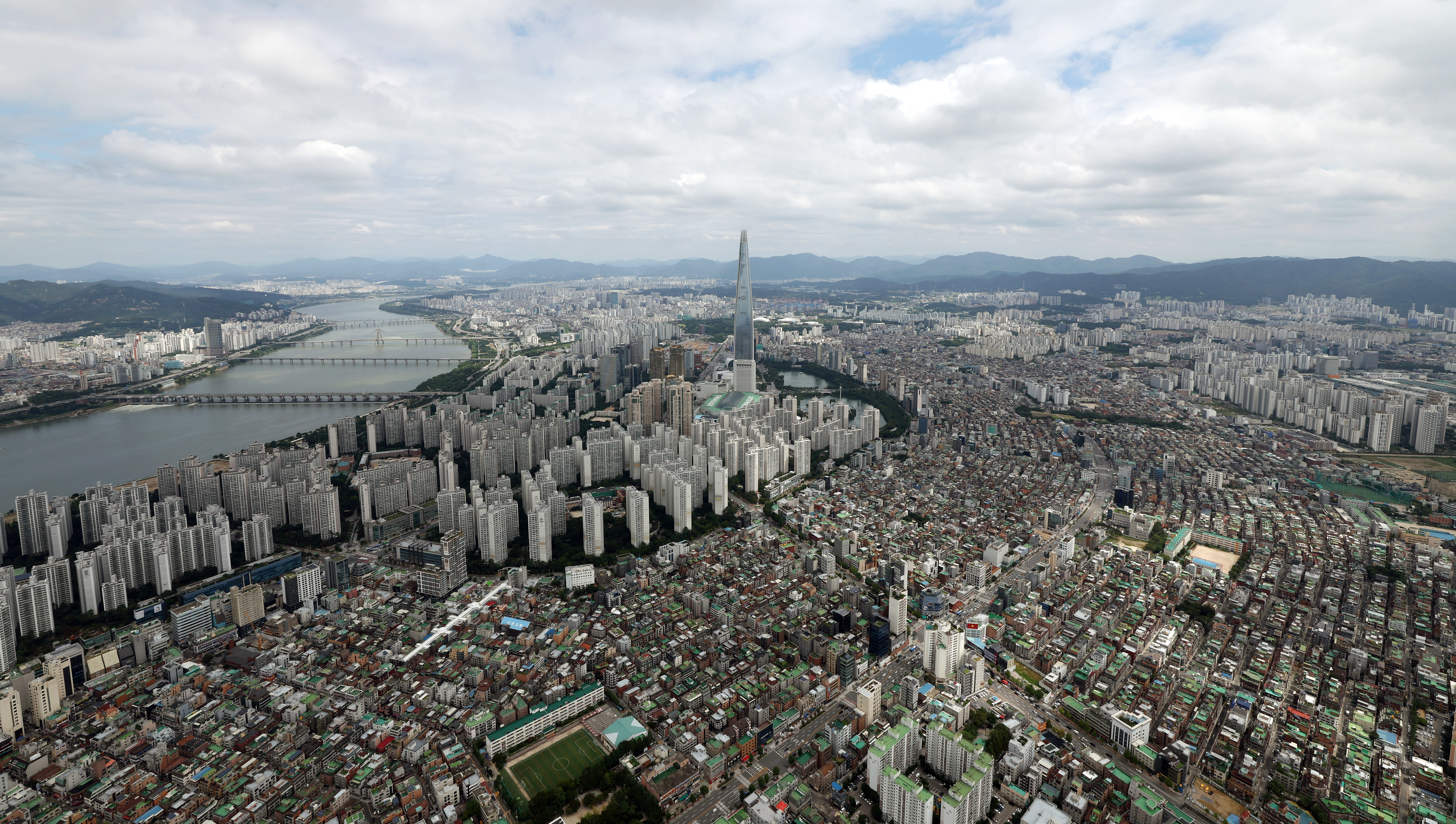 i spent two weeks and two days in South Korea and enjoyed every minute. i’m looking forward to visiting again some day in the future. however, it was time to leave so lunato and i packed our bags and boarded the United airplane heading to San Francisco, USA. lunato had really wanted to visit the Golden Gate bridge so we had arranged our flights so that we could have a 5 hour transit in SF.

immigration was annoying. first we were selected for “extra interrogation” and had to go to their security offices and spent about half an hour there. second, once we were past immigration, the customs officer searched all of my luggage and even went through my laptop. i’m a canadian citizen and have travelled/visited the States more than 5 times in the past 4 years (and each time had to undergo some “extra” checks) but i still had to open my hand carry, my two suitcases, and then log into my laptop and let him search through it for more than 10 minutes. i’ve no idea what he was doing.. i wasn’t allowed to look at the screen >:( finally, when he was done with all my luggage, i started to lift lunato’s suitcase so i could put it on the table and open for him but he told me, “It’s ok. She can go.” bah! canadian citizen vs south korean citizen. oh well, at least we got to see the Golden Gate bridge… and it was really beautiful :)

we took the BART train from the airport to the Civic Center station and then a cab to the Golden Gate bridge. you can see the Alcatraz island from the bridge. the 1996 movie, The Rock featured this prison and since i really liked that movie, i was really excited to see it with my own eyes.

after spending half an hour on the bridge, we barely made it back to the airport and we were the last two to board the airplane :P when we boarded the airplane, we heard the air hostess tell the pilots “ah, they are here!.” unforunately, during the rush to the airplane, i forgot to pick up my wrist watch from the small box i had put it in while going through the security checkposts. doh!! 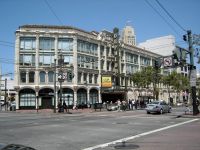 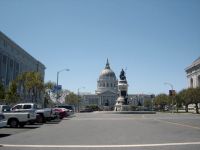 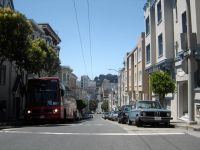 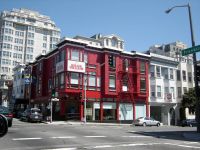 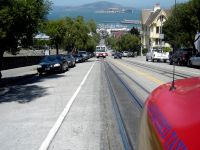 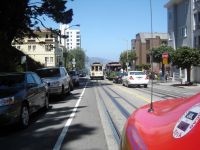 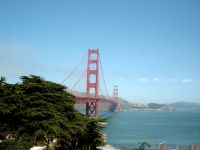 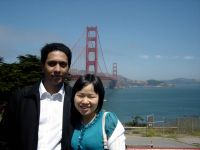 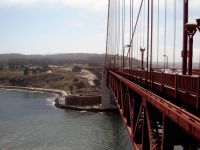 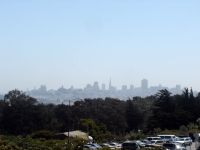 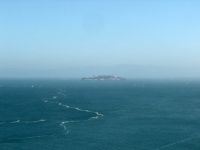 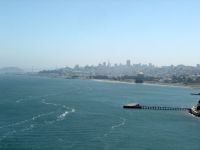 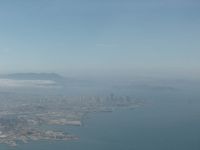 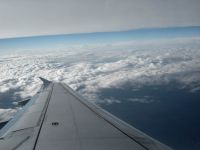 from SFO, we took an Air Canada flight to Toronto and apparently from this flight was considered a domestic flight and not an international one. that is part of the reason we were so late to get to the boarding gate. we were looking for the gates in the International Terminal instead of the Domestic Terminal. so, in case you’re traveling between CA and USA through SF, either be smarter than us and ask someone beforehand which terminal you should be leaving from OR remember this post!

hmm.. maybe i really had gained a lot of weight over the past two dozen days in korea. i was invited to go mountain climbing today. i had never climbed a mountain before in my life so i was a little bit apprehensive about it but lunato’s nephews told me that they are going as well and that their dad goes every sunday. no equipment is required and it is just walking on a path that winds its way up a mountain. cool!!

but… wow, it was really strenuous. i was exhausted by the time we reached the first summit and wanted to stop for a rest half way up there… but i thought maybe this is some sort of a physical endurance test and i was being tested by the family. gotta go on.. one more step.. and another.. and another. remember, each step brings the destination closer. go go go.. phewh. the climb was extremely tiring and my calves were screaming for a rest every time i took a step… but i made it!!. and the view was breathtaking. we basically started from the buildings you see at the right most corner in the amatuerly created panorama. 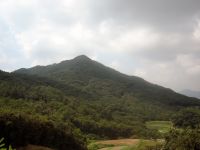 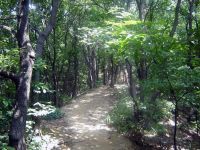 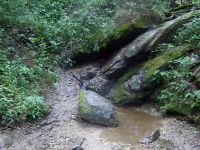 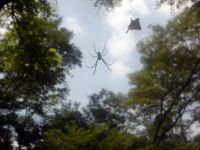 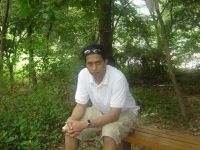 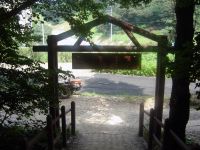 the climb down was easy. losing potential energy is always easier than obtaining it. i am pretty much out of shape as well so it was a good exercise and a good wake-up call as well. however, i really wanted to relax so lunato and i went to downtown Anyang and after food (i laugh in the face of exercise.. hah!) we went to a Karaoke bar. i have no singing ability at all. my allergies, deformed nasal passages, and an almost-ashtma-type condition robbed me of that a long time ago. but this was my first time in a korean karaoke bar so i had to sing and i sang along with lunato and managed not to break any glass :) 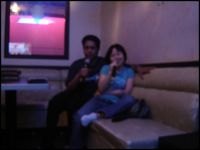 we sang a lot of our favourite songs; Eagles – Hotel California, Coldplay – Talk, Coldplay – Yellow, Oasis – Don’t Look Back In Anger, and ended the night with Extreme – More Than Words. Amazingly enough, all the songs we wanted to sing were available. Karaoke is a pretty good way to relax and pass the time. Fun!